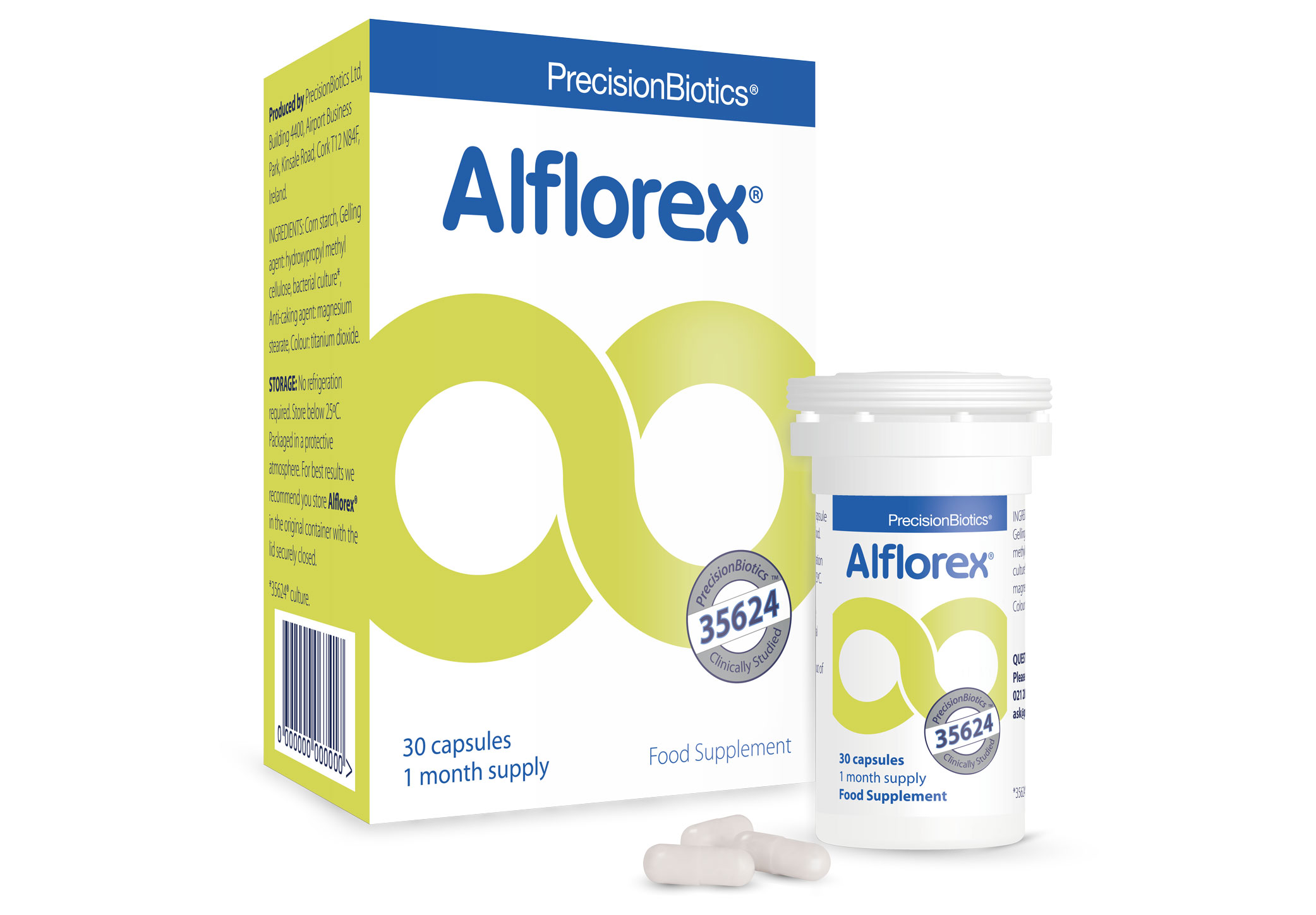 It is also for other symptoms:

Alflorex has a unique probiotic culture – targeted at specific conditions, having millions of culture doesn’t mean best, single and targeted is better.

The live culture has been clinically tested by leading Doctors and Gastroenterologists in people with IBS they showed reduction in all the symptoms.

This is a naturally occurring ‘good’ bacterial culture and is part of the family of bacteria given by mothers to babies at birth.

To ensure this natural culture reaches your gut with its properties intact, they have created a special formulation and confirmed its activity in the gut in clinical trials, using the highest standards of scientific testing.

Alflorex is available over the counter from pharmacies and health food shops.

The  live culture  in Alflorex®, called  35624®, was discovered  by scientists and gastroenterologists  at PrecisionBiotics Ltd. and one of the  world’s leading gut health and microbiome institutions,  the APC microbiome Institute at University College Cork,  Ireland.

Why  is it  different?

It’s  the only  culture that  has been proven  in clinical trials  to reduce:

This  35624®  culture in  Alflorex is special  and it has over 15 years  of research behind it, including  clinical trials performed in the UK.  Other cultures from the Bifidobacterium  family do not have the same properties as  the 35624 culture.

PrecisionBiotics  is a company that’s  dedicated to bringing the  best of nature’s friendly bacteria  to help consumers and clinicians all  over the world. The 35624 culture in Alflorex  has been recognised as gold standard by healthcare  professionals globally and is the #1 recommended probiotic  by Gastroenterologists in the US. Awards Now the #1 recommended  culture by Gastroenterologists and Doctors in the US. Among gastroenterologists  who recommended a brand of probiotic in AlphaImpactRx 2008–2017 surveys. Among doctors  who recommended a brand of probiotic in AlphaImpactRx 2017 survey. Voted the best gastrointestinal  product by an expert panel of Irish Pharmacists and industry specialists at the IPN awards for 3  years in a row, 2015 –2017.The discovery and development of 35624 culture was recognised by the American  Chamber of Commerce when it received the award for Excellence in Research Innovation at the US-Ireland Research  Innovation Awards in 2015.

How  quickly  does Alflorex  work?

Alflorex  starts to  work immediately  and begins to prime  your gut where it is  needed. The full benefits  of Alflorex can be seen after  four weeks. Some people notice some  changes in their gut after a few days  or weeks of taking Alflorex and as it starts  to work so if you experience this, please continue  to take it.

Can  Alflorex  be taken with  peppermint oil, antispasmodics,  antidiarrheals, laxatives?

Yes,  Alflorex  can be taken  with all or any  of these. Alflorex  will help prevent future  unpredictable bowel problems  and helps you regain control  of your gut.

How  long should  I take Alflorex  for and what happens  if I stop? Alflorex will  disappear from the intestine a  few days after you stop taking it.  You should continue to take the product  to maintain the benefits.

How  long should  I take Alflorex  for and what happens  if I stop? Alflorex stays  in your gut for as long as  you continue to take it. It performs  its action in the gut and then will naturally  be swept out by regular bowel movements. By taking  a single capsule of Alflorex every day you can ensure  your gut remains primed.

IBS  is the  most common  disorder of the  digestive system and  also one of the most  common reasons for visits  to GPs.

IBS  is thought  to affect up  to one in five  people at some stage  in their life, and it  generally develops between  20 and 30 years of age but  can begin to manifest in early  teens, after pregnancy or after a  disruptive event like food poisoning.  Around twice as many women are affected  as men. (Sources: NHS & Core Charity UK).

A  survey  on people  with IBS was  commissioned by  Alflorex® in the  UK. It highlighted  how much these symptoms  can affect even the simplest  of tasks.

Here  are some  of the key  findings:

37.4%  said that  these symptoms  limit their work  and social life 48.6%  of sufferers are constantly  mapping out/scanning where the  nearest toilet is.

20%  cancelled  a holiday because  of IBS

26%  are very  careful concerning  their clothes due to  IBS

16.90%  of the students  with IBS have their  exams compromised

40%  had to  cancel their  sports activities

Self Care Essentials from Patchology
September 8, 2022

Supercharge your skin with 5 of the best Serums from NEOSTRATA
May 17, 2021

This website uses cookies to improve your experience while you navigate through the website. Out of these, the cookies that are categorized as necessary are stored on your browser as they are essential for the working of basic functionalities of the website. We also use third-party cookies that help us analyze and understand how you use this website. These cookies will be stored in your browser only with your consent. You also have the option to opt-out of these cookies. But opting out of some of these cookies may affect your browsing experience.
Necessary Always Enabled
Necessary cookies are absolutely essential for the website to function properly. This category only includes cookies that ensures basic functionalities and security features of the website. These cookies do not store any personal information.
Non-necessary
Any cookies that may not be particularly necessary for the website to function and is used specifically to collect user personal data via analytics, ads, other embedded contents are termed as non-necessary cookies. It is mandatory to procure user consent prior to running these cookies on your website.
SAVE & ACCEPT